Embryos in orchid seeds are undeveloped because there is no endosperm. Many tiny seeds can be produced from a single seed pod, making them well-suited for distribution via the wind. A fungus (mycorrhiza) is essential for the germination and development of orchid seeds in the wild. It appears the fungus enters the seed and helps the seedling grow by generating or giving some of the nutrients it needs. The role of the fungus in the continuous development of the mature plant has not been definitively established; nonetheless, it is likely that the fungus aids in the uptake of nutrients and prevents the leaching of nutrients from the root material of epiphytic species. Certain fungal species are required in certain environments, while in others multiple fungi may be able to participate. Some orchids can be grown and germinated in artificial cultures that provide the necessary nutrients without the fungus.

Sympodial growth, a creeping habit consisting of an axis that appears to be continuous but is made up of a succession of parts, is the dominating and, arguably, primitive growth form across a wide spectrum of monocots. Each of these parts develops from a branch, rather than a terminal bud, with the other branch either showing stunted development or being completely repressed. A sympodium typically takes the shape of a horizontal rootlike stem structure known as a rhizome at the end of each “branch.” Most basic orchids seem like any other type of monocot: they have a short rhizome stem, an upright, nonthickened annual stem, a few leaves spaced out in a spiral pattern along the stem, and a terminal inflorescence (flower cluster).

Many orchids, particularly epiphytic species, have varyingly thickened stems, often known as “pseudobulbs.” Despite their varied appearance, these structures may be classified into a small number of morphological categories and exhibit clear signs of evolutionary change. Pseudobulbs (or corms, bulblike stem structures) with several internodes seem to be giving way to those with a single internode as a growing trend. Both terrestrial and epiphytic groups have thickened stem bases, but only epiphytic groups have pseudobulbs with only one internode.

Several different kinds of orchids are known to be saprophytic, meaning they get their nutrients from decaying materials rather than sunlight. Many orchid species, especially those that grow on the ground, go through a saprophytic seedling stage that might extend for several months. It should come as no surprise, then, that various species of orchids have independently evolved fully saprophytic lifestyles. Changes in vegetative and sometimes reproductive plant traits, brought on by adaptations for saprophytism, make it more difficult to establish links between species. The saprophytes have a low herbarium representation because they are so difficult to cultivate. 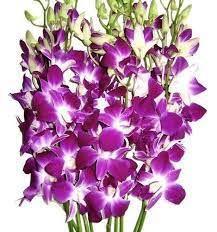 Some fly families (including the Syrphidae and Bombyliidae) only eat nectar and pollen, making them crucial pollinators of flowers. Nectar in the open, shallow nectaries of nonspecialized flowers may attract flies due to the presence of delicious odors. Flies don’t store nectar as bees do, so they have to consume it all at once. More sophisticated fly flowers may trick flies into landing on them by seeming to be putrid materials like manure or carrion. One night-blooming orchid is hypothesized to entice its fly pollinators by having flowers that look and smell like mushrooms. Attracting nocturnal flies, which serve as efficient pollinators, is the next step.

Flowers that rely on bees or other pollinators to produce seed pods typically have evolved traps to capture and detain uninvited visitors. They typically have sizable perches on which to land, and “tails” formed from the flower’s accouterments that serve as navigational aids. Their tones are typically muted shades of green, brown, purple, and red with a smattering of other colors. Typically, putrefying odors are what result. Flies are an integral part of the reproductive cycle of many orchid species. The majority of orchids that are pollinated by flies have evolved unique adaptations, which are superimposed on the basic pattern of the flower of a bee-pollinated orchid, to help the less-orientated flies find their way around the orchid flower. Some of the five petals can be long and taillike or united to produce a flat radial flower. It is possible to arrange these individual blooms into a larger, compound “flower” with a radial pattern. Fringes of club-like hairs that move in the breeze and attract flies may surround the petals or the lip. The flies are caught in a trap made of connected sepals or a saccate lip, and they have to crawl through a tunnel past the stigma and another to escape. Orchids often use a hinged, counterbalanced lip to lure flies into the bloom, where the pollinator is then launched into the flower by the weight of the fly.

When it comes to orchids, it might be tricky to tell where to fly pollination ends and carrion mimicry begins. Some species in many genera rely on attracting flies for pollination only based on sweet odors and nectar production; other species rely on rotten scents but provide no food for the flies they attract.

The huge genus Pterostylis and its relatives in Australia, the Bulbophyllum group in the Old World, and the subtribe Pleurothallidinae in tropical America, which has more than 4,000 species, are the three major groupings of orchids that have become predominantly fly-pollinated.

Many species of orchids are capable of reproducing by themselves. Species in a single genus can exhibit varying degrees of this phenomenon, from those whose flowers open accidentally but still produce fertile seed to those whose flowers never open but still produce fertile seed. Pollen from a plant with a certain combination of genetic elements will not fertilize its ovules or those of any other plant having the same combination, making self-fertilization impossible in many orchids.

The rostellum acts as a barrier between the pollen and the stigma in most plant species. Usually, this physical barrier works rather well, however, in some species, there are variants where the rostellum degenerates or becomes stigmatic, allowing for self-pollination due to pollen germinating on the stigmatic fluid. Most of these variants coexist with typical plant species. To avoid sterility after a long normal period when the flower is open but no pollinator arrives, self-pollination can also occur due to the simple falling of old pollinia.

Some orchids engage in a form of mechanical self-pollination in which the tissues that join the viscidium to the pollinia bend downward and transport the pollinia to the stigma. In orchids, self-fertilization appears to be a survival mechanism used when environmental conditions are too harsh for conventional pollination. Some Orchis species in Europe and numerous orchids in Florida, such as Epidendrum nocturnum and Bletia purpura, have cross-pollinated versions in other places. Although seeds sometimes blow in from the Caribbean, where their natural pollinators are present, the surviving plants in Florida are usually self-pollinating because the pollinators they rely on are absent.

Ophrys flowers trick pollinators with odors that mimic those made by the abdomen glands of female bees and wasps. The sensory organs of visiting males are stimulated by the flowers’ forms, colors (including ultraviolet reflection), and tactile sensations by the hairs on the lip, resulting in behavior similar to that seen in the early stages of copulation with female bees. However, the male’s prolonged stay in the bloom is ensured by the abnormal enhancement of his sense of smell, even when no sperm are expelled.

The pollinia are transferred to another plant during this pseudocopulation. Most of the pollination seems to be done by four different types of solitary bees and wasps. Ophrys orchids, which are pollinated by the wasps Trielis and Gorytes and the bee Eucera, cause the insects to seek copulation with the tip of the lip. Most of the time, the orchids that Andrena pollinates seem to cause the bee to flip around and mate with the lip’s base instead of the tip. The pollinarium is linked to the pollinator’s head in the former, and the abdomen in the latter. The bees just need to engage in the initial behavior to pollinate the flower; they will not come into contact with any structures that cause sperm ejection. Labellum hairs provide the tactile stimulus necessary to initiate the behavior, but the male “suitor” also requires simultaneous and sustained olfactory stimulation. The shiny pseudonectaries may be meant to resemble the female bee’s eyes. Spots of reflective metallic blue, similar to those found in females, add to the overall look. Ophrys species differ in the size of their flowers, and this can be a determining factor in their success.

Cryptostylis orchids, native to Australia, are pollinated by Lissopimpla ichneumon wasps. After backing into the stigma, the wasp bends its body into an arch as it tries to copulate with the flower, holding the base of the lip with its claspers. The pollinarium is fixed in place when the upper side of the abdomen’s apex touches the viscidium. After pausing for a moment, the wasp goes to another flower, where it repeats the same behavior to transfer pollinia to the stigma.

The flowers of the South American orchid Trichoceros antenniform are remarkably similar to those of the fly species Paragymnomma. Lengthening laterally like the spread wings of a seated fly, the thin column and lip base are barred in yellow and red-brown. Although the fly’s head and thorax resemble the base of the lip, this closeness is likely unnecessary for the illusion to work. The flower’s stigma, like a female fly’s genital entrance, reflects sunlight and is positioned near the flower’s “false abdomen.” The fly’s viscidium, which is linked to the fly’s lower abdomen, extends over the stigma of its thin rostellum and emerges through the bristles. For this group, the viscidium takes the form of a flat, padlike structure. Male flies are fooled by the fake female and enticed by the signal from the stigma, which resembles a genital orifice, but they only mate briefly before moving on to other flowers in the region. However, the motion is adequate to retrieve the pollinarium. When a fly visits a subsequent bloom, the long, thin stipe of the pollinarium is pushed into the stigma.

Several orchid varieties feature nectaries that are situated elsewhere on the plant’s stem or leaves. Bees would otherwise steal nectar from the bloom by cutting into its tissues, but they seem to attract ants, which frighten the bees. These extrafloral nectaries not only draw wasps, who deter other insects from stealing the nectar but also attract the insects that the wasps eat. Insects like grasshoppers, crickets, and caterpillars, which consume the blooms, may be deterred by these ants and wasps. Orchids (such as Coryanthes and certain species of Gongora, Epidendrum, and Schomburgkia) can only be found in ant nests, therefore this defense mechanism may be essential to the symbiotic relationship (two organisms living together for mutual benefit) between ants and these plants. If the ants are eliminated, the plants and flowers of these orchids are at serious risk of eating insects.

Cakes, it’s types and uses in different occasions in 2022