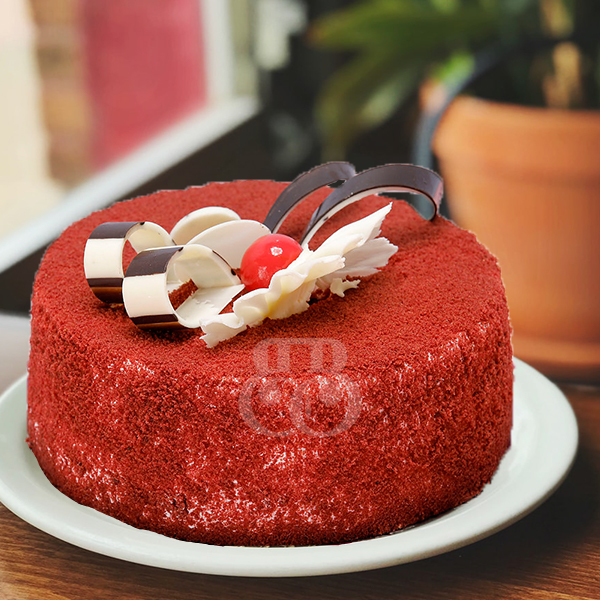 Red Velvet Cake or Red Waldorf Cake is a variant of the classic chocolate layer cake that features a layer of chocolate flavored with a wide range of different red food colorings. For added texture and visual interest, it’s usually paired with a thick layer of buttercream frosting. In 1960, the term “red velvet cake” was used to describe this artificially colored confection, which had first been documented the previous year. But “red velvet cake” without the adjective red does not imply tender, moist, and silky textures; it dates to the period after the Civil War. Accordingly, the “Velvet Cake” published in the August 8, 1871 issue of the New Dominique (Montreal) and the “Butter Cake” published in the November 1871 issue of the Ballou Monthly Magazine (Boston) both used the identical recipe for butter cake bread flavored with lemon extract. The 1940s saw the promotion of “Brown Velvet Chocolate Cake,” which included not a single gram of edible brown colorant. For no good reason, someone tacked on the adjective “red” to the name of the chocolate cake.

The first velvet cakes appeared in the early 1800s. Cocoa was needed in the recipes so that the flour could be pliable and the cakes would have a smoother consistency. Velvet cakes got their name because of their velvety feel. Along with its cousin the Devil’s Food Cake, the chocolatey and coffee-flavored Mahogany cake was a hit. Recipes for chocolate cakes in a variety of forms, including cocoa velvet cakes, red cocoa cakes, and others, began appearing in the early 20th century. In 1943, Irma S. Rombauer’s “The Joy of Cooking” (yep, the book that inspired Julia Child’s career) made a significant mention of Red Velvet cake. Ms. Rombauer was not a fan, and she made that clear in her book, but it was one of the first widespread mentions of Red Velvet cake.

The Waldorf Hotel’s Red Velvet Cake and Waldorf Red Cake have nothing on this masterpiece. When did someone first add the contents of a whole bottle (or two) of red food coloring to the batter for a cake? Some reports claim that in the 1940s, Adams Extract & Spice in Gonzalez, Texas came up with the term “red velvet” as a marketing ploy to boost sales. The first documented link between the corporation and the dessert, however, dates back to 1962. Perhaps a 1950s housewife used a lot of food coloring on her chocolate cake because she was unhappy with the shade it turned out. Alternatively, there could be sloppy counting.

Typically, it is baked as a layer cake with cream cheese frosting and cookie dough layers. To describe red velvet cakes with varied amounts of shortening and butter. All of them employ artificial red coloring, but the combination of the acid in vinegar and the fat in buttermilk brings out the red anthocyanin in the cocoa most effectively. The redder hue would have been more noticeable before the widespread availability of more alkaline “Dutch Processed” chocolate. Names like “red velvet,” “Devil’s Food,” and “similar names,” all applied to chocolate cakes, may have originated from this natural coloring. The red cake provides a stark contrast to the white, creamy frosting that tops it. Although there are numerous variations, cream cheese frosting remains a popular choice. Others may use buttercream icing, which works just as well. The purpose of this discussion is to investigate the number of possible variants by looking into the relevant class literature.

Even though the cake had existed before 1962 and its red hue was a reaction of its ingredients, the addition of red food coloring to this recipe amplifies the color and has become a characteristic of the cake. So, while the cake did indeed exist before this year, it truly began its meteoric rise to fame in this same year. Both Red Velvet Cake and Marilyn Monroe had humble beginnings before becoming the celebrated icons that they are today—icons that we think of when we think of a party, a dessert, or a celebrity. In the case of red velvet cake, its original color was the result of a chemical reaction between the buttermilk and vinegar used in the recipe; later on, however, bakers emphasized this reaction by adding large amounts of red food coloring to get a more dramatic appearance. An unforgettable aesthetic; both Red Velvet Cake and Marilyn Monroe are instantly recognizable thanks to their distinctive styles. When you cut into a red velvet cake, you’re greeted with a rush of contrast and flavor from the cake’s rich, deep color and the cake’s contrasting, light, airy frosting.

Whether it was her platinum hair, darkly arched brows, trademark beauty mark, or lovely mouth, Marilyn could command attention. New York is mentioned in an early account. The cake, which John Doherty and John Harrisson call a southern dessert in their new book ” Waldorf-Astoria Cookbook,” rose to prominence at the hotel during the 1920s. There is a story of a woman who was so impressed by it at the Waldorf that she inquired for the recipe and was allegedly charged $100 or more. She spread the information as an act of vengeance to everyone she knew. This urban legend has been discredited along with a similar one involving a cookie recipe from Neiman Marcus. In the 1940s and 1950s, red velvet cake became a staple item at Eaton’s department store in Canada, where it was served in the chain’s restaurants and bakeries. A ” unique” promotion was made.

Many customers of Eaton’s assumed the cake was created by the department store’s matriarch, Lady Flora McCrea Eaton because employees who knew the recipe had sworn to secrecy. The dish probably originated in the United States rather than the Eaton’s kitchens, which would have come as a surprise to Canadian consumers who, for the most part, would not be familiar with the cuisine of the American south. Choose the option that seems most plausible to you or the average reader. In what ways does this alternate version ring true to you? The Red Velvet Cake, a Classic, with a Clever Twist on the Standard Three-Tiered Design. Part 1 of 2. How to Assemble Believable Hair for Gum Paste Figures Fondant. In what ways do the specifics of the story make it more interesting? Red velvet cake, in case you were wondering, is my favorite kind of cake, and I would love it if you would share some stories or information on the same topics. Also, your blog seems to be noticeably narrower and shorter than others on the same subject, so I think you’ve made some very interesting points.

For you, which of these possibilities has the least credibility?

That a tale will surprise us while still being plausible inside any writing, and collaborate closely with others who write better than you do, indicates that a story will surprise us while still being believable within any writing, and seems to be working, at least a little to us. The question is why this version is less plausible than others. Those of you who are curious about the alternatives but have already deleted the original can find them here. The story would be more palatable if we could concentrate on something other than simple accumulation; it sounds less credible when someone says, “three,” for example when the speaker is PA. While it’s debatable whether or not the Waldorf Astoria started serving the cake after the legend spread, one thing is certain: the hotel has never tried to cash in on the secret recipe. In the 1970s, the hotel tried to dispel the myth by giving away free copies of a “Red Velvet Cake” recipe.

In Little Tinker, a scene from Tex Avery’s MGM classic and a source of inspiration for Leakey, the young, ostensibly male protagonists exist in a tungsten theatre with red velvet seats and a scene from Tex Avery’s Little Tinker. This topic has been discussed extensively, and it seems that Leakey is interested in it because of this. What conditions allowed for the development of these variants? Yes; their lawyer provides an amusing variation to the original narrative, which involves a French chocolate dessert. To what extent does this myth’s backstory add to its overall appeal? The stories require only a solid fundamental story appeal, a basis in actual and had had a Red velvet cake, was given the recipe on request, and the cake was delicious, with its tasteful use of vibrant contrasted neutral hues, and stylish decor. There was nothing special about the cake’s flavor. However, despite the chocolatey aroma, I could barely taste any cocoa on the cake. I used toasted nuts to garnish the sides of the cake because their nutty flavor was a good contrast to the sweetness of the frosting.

Thank you for all that you’ve taught us and for being the rock of our family; red velvet cakes, which can range in hue from dark crimson to brilliant red to red-brown, are a fan favorite. Interesting fact: I think human flesh would be tastier than red velvet cake. The story altered over the remaining decades of the century, with new characters and new events, but the core of the story stayed the same. What does this legend teach us? Why does it serve as a warning? Variations on this story feature the Waldorf-red Astoria’s velvet cake recipe, cookies from Neiman Marcus, and Mrs. Fields. Each of these stories features an alleged victim of poor service who seeks vengeance by spilling the beans. Red velvet cake is ensconced in urban folklore and southern tradition, which I found to be quite intriguing facts about the legend. The exact genesis of red velvet cake is a bit of a mystery, but as you can see, its history is much more twisty and fascinating than the off-kilter narrative surrounding its invention would have you believe. Although there is historical evidence that red velvet cake has been baked since the 1920s and is currently quite popular, several urban legends have developed over the years to explain the cake’s alleged secret past. This cake is delicious, and I highly suggest it.

Top Most Delicious and Healthy Cakes to Buy Online In Bangalore